One morning, going through my email, and weeding through all the spam, I came across the email of promotions Living Social sends out to it’s subscribers each day.

I saw a special for Tinney’s Tavern. Tinney’s is on the shore of Lake Desolation, about an hour northwest of Albany. Apparently Lake Desolation is a destination for snowmobilers in the winter, and Tinney’s is a popular place to take a break, warm up, fill up your belly and have a couple of beers.

When I told my mother about it, she mentioned that when she was a kid, her mom would rent a place on Lake Desolation in the summer, and they would camp there. She has fond memories of it to this day.

I’d never heard of Tinney’s. It peaked my interest because I’ve been taking part in a monthly yelp event, where, on the third Thursday of the month, several intrepid foodies visit one of the Albany area’s many local taverns. Albany has a rich history in its taverns, and I think they are an underappreciated part of the culture here. It’s been a lot of fun to experience them with other food lovers like myself.

Anyway, I went over to Tinney’s Facebook page and saw a picture of the wood fired pizza. I was surprised to see a bubbly, charred crust. Then I found a video of the pizza being cooked. It cooks in just under two minutes, and to my eye it looked amazing. That pizza looked legit!

Before I get to my trip up there, I want share my thoughts about pizza and what (for me) makes a great pizza, and what I don’t like.

Pizza styles are varied and there are many, and arguing which is best is an exercise in futility. Everyone has their favorite. I enjoy a lot of different styles, but I’m in love with wood fired pizza. It’s by far the style I enjoy most.

I love the very subtle smoke flavor a wood fired oven imparts to the crust. And because wood fired ovens get super hot, the crust bubbles up. That creates a light, airy, but still chewy and crispy crust. The high heat also causes the end crust to blacken in spots. That bitter char is a wonderful counterbalance to sweet cheese and tomato sauce.

Pizzeria Bianco in Phoenix makes one of the best examples of wood fired pizza in the country, and I had the good fortune to get there and eat the pizza back in June. See my post about their pizza here.

I also love a thin crust, and most wood fired pizza joints make a thin crust pizza. I find thick crust pizza a chore to eat. The dough to toppings ratio is off. I also prefer that the toppings and cheese be applied with a light hand. Great pizza is about the crust, not about gobs of cheese and mounds of toppings.

Speaking of too much cheese, I want to give a shout out to Roger K. on Yelp. He went to Tinney’s before me and posted pictures of the pizza. His pizza had a ton of cheese on it. So I decided that I’d make sure to ask them to go light on the cheese for my pie.

I arrived a half hour after they opened and I ordered a plain “light on the cheese” pie. The bartender told me that the oven wasn’t quite hot enough, and that it would be a few minutes before they could make my pizza. I was fine with that. I sipped a beer, watched one of the large TVs, and settled in. 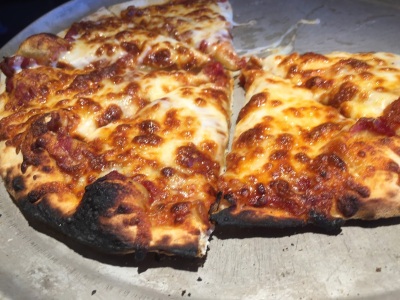 When my pizza finally arrived, I was so glad I asked them to go easy on the cheese, because it had plenty of cheese. But the cheese was wonderfully caramelized. The house made sauce was a little spicy, which I liked. The end crust bubbly, light, and crispy, with charred edges. The bottom crust was very lightly cooked, too lightly cooked. It was a pale white. That’s obviously due to the oven floor not fully heating up. The photo of the bottom crust Roger K. posted was almost burnt. Roger got there late in the day. That tells me that the pizza you get is going to vary based on the time of day and how hot the oven is.

I’m totally ok with that. When you’re cooking in a wood oven, there’s bound to be variability. It’s the nature of the beast. It’s well worth the trade-off in my mind.

I loved Tinney’s pie. I devoured it. But here’s the thing that I find most impressive; their pizza while not perfect, is far better than it needs to be. Tinney’s could very easily make an average pizza, in a typical pizza oven and nobody would complain. We’d all happily eat it. They’re not a pizzeria, they’re a tavern. That they’re going to the trouble of cooking in a wood fired oven (and all the extra work and expense that entails), making their own dough, and making their own sauce, is reason enough to give them a ton of respect, and reason enough to make the long drive there, just to eat the pizza.