Search my yelp reviews for the words gooey or gloppy and you’ll find a few rants against bottled, factory made salad dressings. I can’t stand them, and in my opinion, most of them are just terrible.

Most use soybean oil, which is flavorless, and they’re loaded with thickeners, which gives them that gloppy consistency. Plus there’s the artificial colors and flavors they’re made with. And they’re usually too sweet. Worse, they’re sweetened with high fructose corn syrup, which is just awful for you.

I really don’t get why people like them. They just can’t compare to a simple oil and vinegar based dressing. Not only because of the unpleasant gooey texture, or cloying sweetness, but they tend to be salty, and artificial tasting, and they cover up a great salad instead of complimenting it.

It drives me nuts when I go to a restaurant and they’re serving bottled dressing on their salads. It’s just so lazy.

If you peek in my fridge you won’t find any bottled dressings. We never buy them. Well, more truthfully, on rare occasions I will buy ranch dressing. But I use that on sandwiches, I do not like it on a salad.

We eat only one salad dressing in my house. My wife’s dressing. It’s so good, it’s the only dressing we make. We never tire of it. She’s been making it since I met her nearly 15 years ago, and I have no desire to eat anything else on my salads. I love it. It’s fantastic.

It’s very light, it has a hint of nuttiness, and its just a little sweet.

She makes it with walnut oil, seasoned rice vinegar and honey. It’s super simple, and takes just seconds to put together. 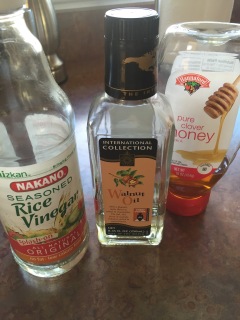 I really prefer walnut oil over olive oil for vinaigrettes. I like the subtle nutty flavor it adds. It works so well on any kind of leafy greens. I also think rice vinegar is underappreciated in American cooking. It’s wonderfully bright, and has a slight tang to it. Mixing it with walnut oil makes magic.

I think the only difference between seasoned rice vinegar and plain, is the addition of sugar. You’d think using a sweetened vinegar and then adding honey would make the dressing too sweet, but trust me it doesn’t. It’s not cloying in the least. I suppose we could use plain rice vinegar, but like I said, her dressing is so good, and she’s been making it that way for so long, I don’t see any reason to change it. Don’t fix what ain’t broken.

She says she originally learned it from her parents, but she’s been making it for so long, and she’s modified it over the years, so it has become her recipe.

She uses wishy-washy proportions. So I recorded her doing it, to give a better idea of exactly how she makes it.

Put all the ingredients in a bowl and whisk until incorporated.