I don’t know if there’s a chain that is more divisive among restaurant goers than The Cheesecake Factory. There seems to be no middle ground. People either love it, or hate it. But it seems to endear a special distaste with foodies’, those for whom food and restaurants are more a hobby and obsession than they are sustenance. 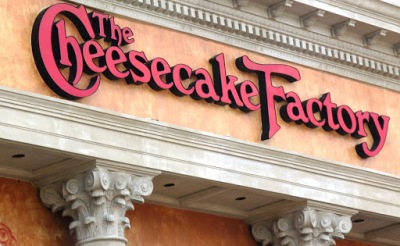 It’s detractors cite The Cheesecake Factory’s gaudy, almost circus like decor as offensive. They find fault with it’s menu that gives new meaning to the word vast. They especially dislike the portions, which for some dishes are enormous. Worse, The Cheesecake Factory has a penchant for butter and cream, and many of the dishes have astronomical calorie counts as a result.
To complicate matters, on a recent visit, I was handed no less than three menus. The regular menu—that has dozens of dishes on it—the relatively new ‘Skinnylicious’ menu, and what was new to me, a happy hour menu.
It’s no wonder some might be taken aback, and for anyone new to The Cheesecake Factory, it can take a considerable amount of precious dining time just to peruse the menus. It’s understandable The Cheesecake Factory has it’s critics. But in spite of all it’s alleged sins, there’s one thing it has going for it, and that thing is all that really matters.
THE FOOD IS GOOD.
Pardon my use of all caps, but I want to make a point, especially to those who might be in the camp of it’s detractors. For the most part, the food at The Cheesecake Factory is cooked to order. They use quality ingredients and the majority of it’s dishes are made from scratch. Most important, the food is delicious.
I once had a friend tell me, “I don’t like The Cheesecake Factory. There’s no way such a large menu could be fresh. It’s all frozen. The food is crap.”
Logically it makes sense, but that argument is easy to rebuff.
First, The Cheesecake Factory limits the number of locations it has in each metro area. Albany for example has just one. That means that each location is large, and serves many tables everyday. That equals a lot of turnover in the kitchen, which allows them to have a large menu and still make everything from scratch, and, keep it all fresh.
Second, though the menu is large, if you look closely, there is actually a lot of repetition among the dishes, which of course means the kitchen is working with far fewer ingredients than at first glance it would seem.
Third, most every time I’ve been to The Cheesecake Factory the food takes time to get to the table. When you’re cooking from scratch, food takes longer to prepare. There’s a reason why fast food is fast. It’s processed, and takes far less time to prepare. The Cheesecake Factory is mostly cooking from scratch, and it shows in the preparation times.
Lastly, and to get back to my central point, although not everything is outstanding, and with such a large menu there are sure to be some duds, there are dishes that are fantastic, and there are quite a few of them. Trust me, I’ve tried many. I don’t claim to be an expert, but I think I have enough of a discerning palate to know the difference between crap, and quality food, and The Cheesecake Factory is not crap. Again, not everything is great, but most of it is fresh, of good quality, and damn tasty.
Here’s my challenge to you if you are not a fan of The Cheesecake Factory. Forget what you think you know, go have dinner there, and keep an open mind. I’m not ashamed to admit I like it, and to make the claim that it’s one of—if not THE—best casual restaurant chain(s) in America.

One thought on “In Defense of The Cheesecake Factory”