I was going to title this post “Making Better Pizza at Home” because I don’t quite think my homemade pizza would qualify as great. However, grading it on a relative scale, and though I have a ways to go yet, I do think it’s possible to make great pizza at home.

I’ve discovered 3 secrets to making very good pizza at home, and using those 3 methods, anyone can make pizza close to something you’d get at a decent pizzeria.
I started making pizza at home about 8 or 9 years ago, when my wife bought a pizza stone and pizza cutter at one of those kitchen gadget parties. All this time though, I’ve used the same process and pretty much stuck to a routine which consisted of using store bought dough, rolling out the dough with a rolling pin, and cooking it on a pizza stone with my oven set to its max temp (550 degrees).

This method produces a perfectly decent pizza, and in fact, my 8 year old daughter loves my pizza and often requests it, saying “Daddy’s pizza is the best”. But of course if the world revolved around the proclivities of 8 year olds, there’d be a Disney store, candy store, and playground on every corner.

If you’ve been reading the blog the last few months it’s obvious that I’ve been slightly (to be kind to myself) obsessed with pizza. And then about 3 weeks ago I got it into my head to significantly improve my homemade pizzas. I wanted to use a method that didn’t require expensive equipment or ovens, or fancy ingredients, or too much time, and I wanted it to be something the average home cook could replicate in their home, with a typical home oven.

The thing about pizza is it’s easy to make, but requires the aforementioned equipment, time, (and especially) experience to make truly great pizza. I think I’ve succeeded in finding a method that makes outstanding pizza, while still meeting the goals of being easy to replicate at home with a minimum of investment, time, and experience. The three secrets I discovered that significantly improved my pizzas is the broiler method, homemade dough, and hand stretching the dough.

When looking for a homemade dough recipe, I wanted one that was easy, and, I didn’t want to invest a ton of time or effort into it, or have to worry about buying special ingredients to make it. I think I’ve found a good one. It’s called the 72 hour pizza dough. It takes just five minutes to make the dough. You let it proof on the counter for 24 hours, then ball it, and put it in the fridge for another 48 hours. The only drawback to this dough is you need to plan ahead, but actual time spent working with it is just minutes. I’ve frozen it, and it was just as good out of the freezer, so you can make several doughs ahead of time. Just take one out of the freezer in the morning, set it on the counter, and it’ll be ready to go for dinner time. Because of the 72 hour fermentation time, the dough has a lot of flavor, and because you don’t knead it, it’s easy to work with (it’s not too elastic or rubbery).

The broiler method also made my pizzas much better. It works like this; you put your pizza stone on the top rack in your oven. Crank the oven up and let the stone heat for around 45 minutes. Cook the pizza on the stone for about 3 to 4 minutes, then turn on the broiler, and cook the pizza another 2 minutes or so. The broiler will crisp up the crust, make it wonderfully browned, and create some char very similar to what you normally would need a wood fired oven to achieve.

Lastly, I stopped using a rolling pin, and started stretching the dough by hand. This takes practice, but results in a bubbly, thicker crust. Using a rolling pin is fine, but you get a very thin, crunchy crust, and I’m aiming to make something closer to a Neapolitan style pie. My daughter and wife prefer the thinner, crisper crust of the rolling pin method, so this obviously is a matter of taste.

Here’s some examples of my experiments:

This pizza is made with the 72 hour dough, and hand stretched, but not using the broiler. I had to cook the pizza longer to get the crust browned, plus I used flour when working with it. You can see how white the crust is, and I could taste the flour. I switched to using semolina after this.

This pizza is exactly what I’m shooting for and is one of the best I’ve made so far. Bubbly and light, but still chewy crust, with some char and good browning. 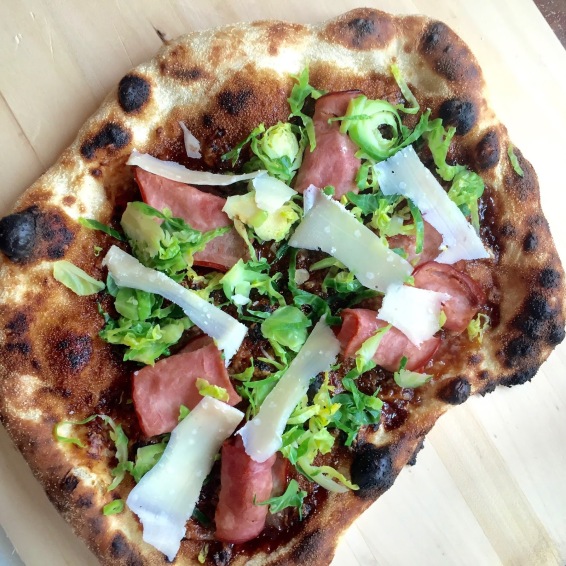 This dough was very wet, and I had to use a ton of semolina to keep it from sticking to the peel, which gave the crust a gritty texture. It also got away from me and I overcooked it. Now when the pizza is under the broiler, I stay vigilant and don’t move from the front of the oven.

Here I used a rolling pin, but still got a few bubbles and some char. 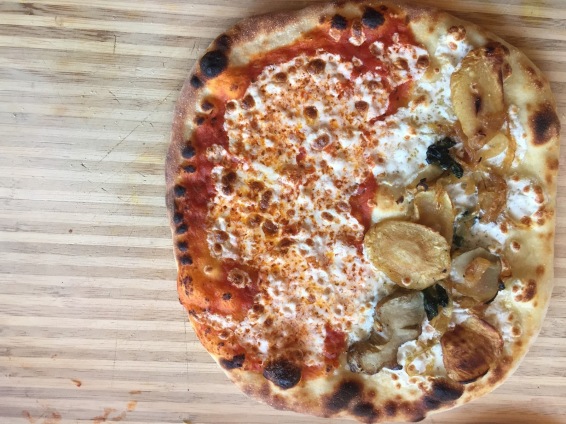 Another wet dough. It stuck to the peel and ripped when I tried to launch it onto the stone. In spite of that, it was delicious, and I think it came out great. 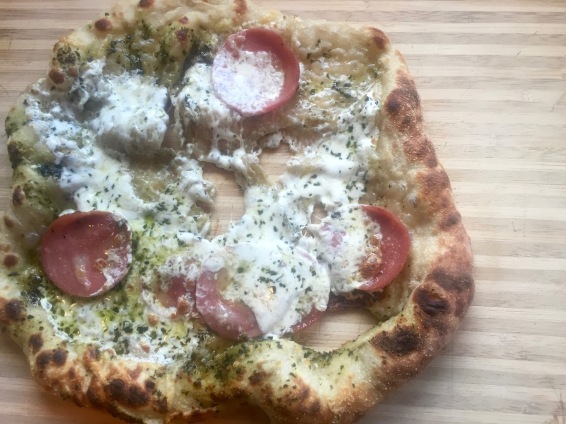 This dough sat in the fridge for a full week. I let it sit on the counter most of the day before baking it to dry it out. The crust didn’t rise as much as I would’ve liked, and the cheese started to burn so I pulled it a few seconds early. It was still delicious though. 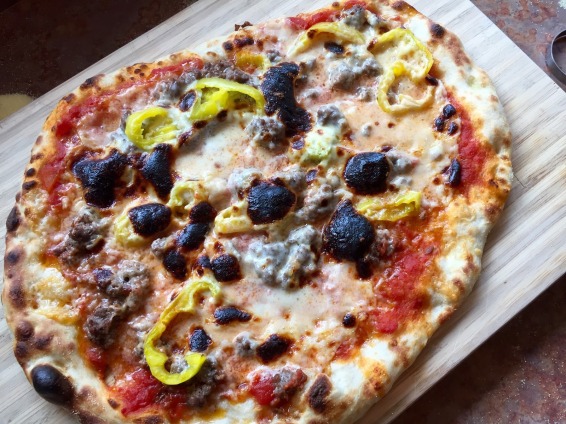 I almost forgot to mention the tools I used. To make these pizzas you just need a pizza stone, a pizza peel, and a pizza cutter. All three can be had for well under $100 total. The 72 hour dough, and stretching out the pizza by hand takes experience and practice to work with, but I got great results in just a few tries. I expect my pizzas will only get better as time goes on and I get more experience working with the dough.

[Edit: Per Jon in Albany’s comment, I wanted to add that you do need a scale as well as the other items I mentioned. Measuring by volume is very inaccurate, and to achieve consistent results when making dough, you do need to weigh the ingredients. But this is something most home cooks already have in their kitchen, and if you don’t have one, they are pretty cheap.]