I’ve been eating a lot of pizza lately. In the last 9 months, I’ve had the good fortune to eat at three pizzerias that are some of the best in the country. Pizzeria Bianco in Phoenix, Pepe’s in New Haven, and Varasano’s in Atlanta. At home, in the Albany area, I’ve been eating pizza at a whole host of different local places as well. Both new and old. You could say in addition to my burger obsession, I’ve also been obsessed with pizza over the last year or so as well.

The nice thing about all the above, is that eating a lot of different pizza locally, and from all over the country, (and also with some influences by others that I respect), has helped me to form a strong opinion of what I like in pizza, and don’t like (which I’ve already spelled out in my Tinney’s Tavern post, so I won’t rehash it here), but the short version is I’m in love with Neapolitan style wood fired pizza.

Restaurant Navona is brand new, they opened just before the New Year, in the same spot as Midtown Tap & Tea on New Scotland Ave. Steve Barnes’ post on Navona, calls them Mediterranean, but the menu looks to me to be more Modern Italian than Mediterranean. See Steve’s post for more detail about the restaurant.

I stopped in for lunch on a Wednesday, and I was the first to arrive for the day. It was just me, and Kim and Mike, the owners, and I learned that she runs the front of the house and he’s the chef. I had a very nice conversation with Kim, and later on, I got to talk to Mike for about 20 minutes, and ask him a bunch of questions. Both Kim and Mike were affable and charming.

Mike and I talked about his wood fired oven and its idiosyncrasies, which I found fascinating. He told me about how he makes his dough and how a very experienced baker friend of his helped him formulate the recipe for the dough. He said he teaches a charcuterie class part time at SCCC, which led to the next obvious question; Is he curing his own meats in house? He told me not yet, as he’s still getting his feet on the ground and doesn’t have the proper equipment, but it’s something he hopes to do in the future. He does make the mozzarella for the pizza in house though and makes all his own pasta. We talked about a few other topics as well, and it was a fun conversation. I learned a little about him and his passion for the restaurant, and for food, and because of my current fetish with wood fired pizza, it was especially interesting to talk pizza with him.

Maybe I feel this way because Navona’s pizza is exactly the kind of pizza that rings my bell, but it has the potential to be among the best in the Capital Region.

The restaurant has only been open for five days. Yet the pizza is amazingly good. Plus, after my conversation with Mike, I’m convinced the pizza will only get better. I got the impression he’s still learning the subtleties of pizza making. And if my assumption on that count is correct, oh boy is Albany ever in for a treat. 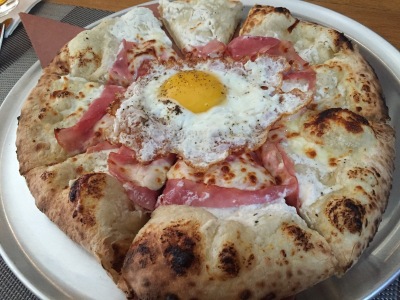 Before I stopped in, I took a look at the dinner menu on the website and decided I had to have the Valentina pizza. It’s described as “Pecorino Bianco, Ham & Egg & Black Pepper”. I’m a sucker for a runny egg on pizza. But when I was handed the lunch menu, the Valentina wasn’t on it. Thankfully, I had the good sense to ask, and Mike happily made it for me.

I broke that sunny side up yolk, and watched with glee as it ran over the pizza. The ham was mild but tasty, as was the cheese. Just look at how bubbly, and airy the crust is. It’s light, but chewy. Although it looked a bit pale, it’s crunchy in spots with a fair amount of char (especially on the bottom crust) and has really good flavor. If I had to guess, I’d say it’s about 10 inches in diameter, it’s plenty for one, or enough for two or three to share as appetizer.

Mike stressed to me he’s not a pizzeria, and there’s much more on the menu. Nevertheless, I’m excited for the future as Mike gains more experience with his oven, and his dough recipe. As I said, his pizza is only going to get better.

The bottom crust is wonderfully charred throughout:

The pizza below was made in error and they graciously asked if I’d like a slice or two. Sausage, tomato, and cheese. I was happy to oblige! The crust on this pie, as you can see, is darker than my Valentina, but still was light and chewy, with good crunch.

3 thoughts on “The Wood Fired Pizza at Restaurant Navona”