I’m not in love with grass fed beef. This is heresy in the foodie world. But I’ve yet to become fanatical about grass fed beef, while at the same time, not being ignorant of why it’s preferable over grain fed.

As grass fed beef becomes more prevalent, and I eat it more, I’m starting to like it more. It has an earthier, deeper flavor than conventional beef, which has taken me time to appreciate. My opinion may change in the future, and likely it will, but for now, it still doesn’t factor into my decisions when choosing what and where to eat. I’m still a bit apathetic toward grass fed beef. And me being frugal, its higher price sometimes causes my wallet to revolt.

Whole Foods has added burgers to the menu of their in-store restaurant. Being Whole Foods, the beef they use is grass fed, and they also claim it’s humanely raised. The feel good is there. But is the taste good there? Only for the strict purposes of science mind you, I intended to find out. 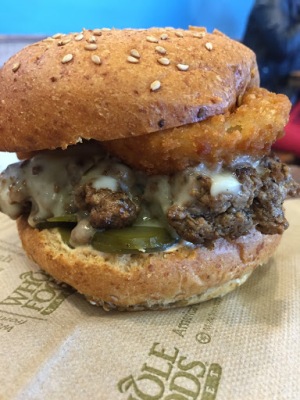 The gentleman that made my burger was super nice, affable, and very accommodating. He asked me do I “want the pickles on top or the bottom?” Do I “want the roll toasted?”, and he left several other decisions up to me, which I thought was great. But he left out the most important question, and that’s how I wanted the patty cooked. He cooked it leaning toward medium-well. There was just a hint of pink in the very center of the burger, and that made the burger dryer than I would’ve liked. I also thought the patty could’ve been a bit more tender. And it was too lean for my tastes. It’s good, but nothing special flavor wise. I’m curious though to get one medium-rare, in hopes it will make a difference. They serve it on a whole wheat roll, which along with the grass fed patty, adds to the earthiness of the sandwich. I also tried their fries. They were totally pedestrian.

Overall it’s a solid burger, though not something I personally would seek out. But if you care that your beef be happy, that alone is reason enough to choose Whole Foods’ burgers over others. The appeal of that is not lost on me. And at $8, the price is reasonable. 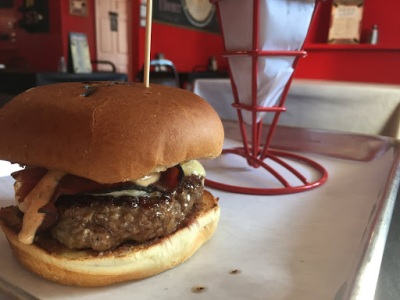 Another purveyor of grass fed burgers is Local 388 Burger Bar in Ballston Spa. These guys have been on my radar for some time, and I finally had the time to make the trek up the Northway to check them out.

Local 388 is in a small building, just off of Rt. 50, a couple of blocks north of the Ballston Spa city center. You’re greeted to a bright red interior, as you enter, and when I stopped in at 2 o’clock, there was just one other person in the restaurant. Like Whole Foods, I received friendly, accommodating service.

I liked their burger more than Whole Foods. It had good beefy flavor, and it was juicy and tender. The brioche bun it’s served on is good too, it’s small enough not to get in the way of the beef. These guys make a very good burger. It’s definitely worth a stop if you’re in that area. I tried their fresh, house cut fries too, and those were quite good.

I’ve made no secret of my love for The Beer Belly. I’ve been there at least 4 or 5 times now, and have yet to be disappointed. I stopped in on a weekday afternoon to fill my growler, and decided to have lunch while I was there. The patty melt caught my eye.

I rarely order patty melts. As much as I love burgers, I just don’t find patty melts that appealing, for reasons I’ll detail in a sec. But I decided to set my prejudices aside, and go for it. Rye bread, caramelized onions, mushrooms, and a cheese that the menu describes as “creme de brie”. Damn, that thing was tasty. To my surprise, it had two patties of beef! The creme de brie was gooey, and salty, just like American cheese (this is good). I loved the earthiness and sweetness the mushrooms and onions added. But I really like that the bread is not buttered. Every patty melt I’ve ever had, had buttered bread. Obviously, a patty melt is just a grilled cheese with a burger in it. I’ve always found them to be too greasy. Greasy on the outside, and greasy on the inside. But the dry, toasted bread of BB’s patty melt really makes a difference, and makes for a much better sandwich. It impressed me so much, I’m going to start experimenting with not buttering the bread when I make panini style sandwiches at home.

All three establishments make very respectable burgers. They’re all good. But I like Beer Belly’s patty melt best, and I’m almost ashamed to admit that. For better or worse, I’m a sucker for salty, gooey cheese sandwiched between two tender beef patties, and the Beer Belly patty melt delivers in spades.