I’m convinced most Americans are addicted to sugar.

I went to 20 North Broadway Tavern last night with friends. We ordered wings, and one of the sauces we tried was the ‘triple threat’. Apparently, it’s popular and people really like it. But I found it lacking. It’s not a triple threat, it’s a single threat. Ostensibly, heat is one of the three threats, but in actuality, it’s only a threat to your blood sugar levels. It’s all sweet, with no heat.

I’m a big fan and sweet and spicy. But, it must be very spicy, with a hint sweet. I’d put the proper ratio at something like 80% spicy, with 20% sweet.

END_OF_DOCUMENT_TOKEN_TO_BE_REPLACED

Daniel B., Albany’s Yelp Ambassador, was gracious enough to invite me to participate in a burger tasting. He knows I’m a big fan of the form, and I’d enjoy judging a few burgers. Initially, I was a bit hesitant, but ultimately decided I’d do it, and I’m glad I did. It was a blast. There were four judges in total, and besides Daniel and me, Josh D. the Syracuse Yelp Ambassador, and Yelp Elite Thomas C. also took part in the fun.

But this was no ordinary burger tasting; we’d be judging the “Best Burger in New York” contest, run by the NY Beef Council. It’s a contest they do every year, and the goal is to highlight local beef producers and the businesses that sell their product. That’s great, and a noble cause in my opinion.

The restaurants all happened to be in Central NY, between Utica, and Syracuse, which meant a long day, with lots of driving. Daniel picked me up at 9:30 am, and we didn’t get home until 11 that night (after a little side trip to Utica for pizza). It was indeed a lot of driving and of course, a lot of eating.

END_OF_DOCUMENT_TOKEN_TO_BE_REPLACED

Have you seen the video series Upstate Old School Vic Christopher is doing for Two Buttons Deep? In the first episode, he visits O’Scugnizzo’s Pizzeria in Utica. O’Scug’s makes a form of Utica tomato pie, and the place is the second oldest continually operating pizzeria in the US. The video is less than four minutes long. It’s worth a watch.

Barely one week after Vic’s video was posted, Daniel B. and I had some business together in Central NY (more about that at a later date), and after seeing the video, both of us were curious to visit O’Scug’s and experience the pizza.

I was not impressed, and frankly, perplexed as to why O’Scug’s is popular.

END_OF_DOCUMENT_TOKEN_TO_BE_REPLACED

This past Sunday I had the pleasure to stop into Taqueria GDL in Glens Falls. I’ve already blogged about their excellent tacos. GDL is special, and they’re doing good stuff. I love the place. But they’re not perfect, and that point was driven home to me Sunday when I placed my order. The gentleman that waited on me, who I’m pretty sure is the owner, asked me if I wanted cilantro on my tacos.

Why would a transplanted Mexican making authentic Mexican food ask if I want cilantro on my tacos? Cilantro is de rigueur on tacos. It’s equivalent to asking if I want salt on my fries. That is unless you’ve eaten at too many Tex-Mex, or what are really Ameri-Mex, pseudo-Mexican restaurants. It’s likely too many customers complained after being served tacos adorned with the yummy green herb, and he’s acquiescing to their misguided request.

Shame on you cilantro haters. You’re ruining it for the rest of us.
END_OF_DOCUMENT_TOKEN_TO_BE_REPLACED

We recently spent 12 days in Sarasota Florida. We had planned on spending 14 or 15 days there, but we decided to cut our vacation short due to Hurricane Hermine. Though it wasn’t forecasted to hit the Sarasota area, we thought it best that we head home (we drove) before the storm hit the Florida coast. So on a Thursday morning, we hastily stuffed our bags into the car and headed north. In the photo below you can see the storm on our heels. We’re the blue dot in the middle of the photo, in Gainsville, about three hours north of Sarasota. We left just in time. 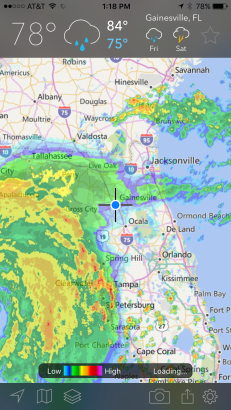 The good news is Hurricanes move very slowly (Hermine was moving northeast at just 14 MPH) and for the most part, we stayed ahead of the storm. It was fun running from it, and we were far enough ahead that we were never in any real danger.

But this isn’t a weather or travel blog, this is a food blog, and I want to share a couple of interesting eats I had on our trip. I didn’t get to visit nearly as many places on my bucket list as I’d hoped, especially considering how much time we spent there, but I did get to a few, and here are three that stood out to me as memorable.

END_OF_DOCUMENT_TOKEN_TO_BE_REPLACED

I had not a single close friend during my teen years. Oh, I had acquaintances, and I would spend time with my two brothers and other family, but for the most part, I felt alone.

I was extremely shy when I was little. I don’t remember when it dawned on me that I was shy, but at some point I became aware of it and it caused me to withdraw further. I was a skinny kid, and not at all athletic. I wasn’t cool. I was geeky and dorky. As a result, I was picked on in school, and because I was shy I wouldn’t stand up for myself. I withdrew even more. By my early teens I was a loner. It’s better to be alone, than to be picked on. I felt I wasn’t likeable, so I was afraid to reach out to people and strike up friendships because I was convinced they wouldn’t like me. I deeply envied those who had a group of friends or were part of a clique. I desperately wanted to be a part of a group and spend time with others that have similar interests.

Thankfully, I quickly grew out of the shyness, and for the most part I’m now very outgoing. My personality has swung 180 degrees.

But a few years ago, I started to get frustrated with my social life. I was getting more and more into food, and there was no one among my friends or family that shared my passion for it. I wanted to share that passion with others who could appreciate it. I wanted to experience the camaraderie of being with birds of the same feather. But I had no idea how to make that happen.

That’s when I discovered Yelp.